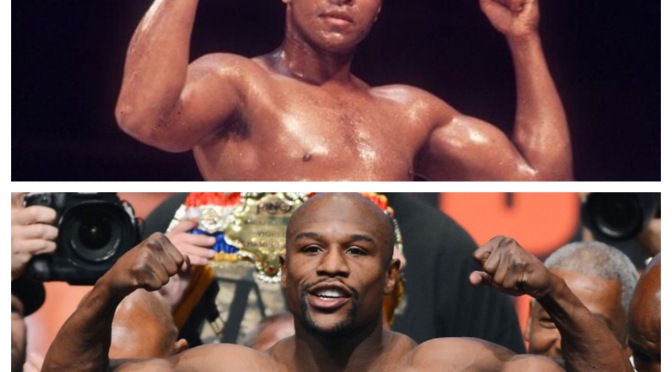 This Blog is analysis of two Iconic figures in the Sports World of Boxing.

Up first, we have a fighter who is often regarded as the Greatest of all-time, Muhammad Ali.  Too often we just define greatness by simply the feats that are done in the athletes specific arena of expertise.  Yet, Ali transcends this, he does not have the greatest record, but he knew that he was a human.  He knew as a being part of humanity that he had a role within and obligation towards humanity.  He knew that he was bigger than boxing and that he was working towards something Bigger than himself.

As an Icon, we must factor the totality of a man–the totality of a human being,  comprising of the mind, body, soul, and spirit.  Not just the accolades one could do with their specific gift or physical prowess.  But how one uses the attention one receives for a bigger purpose of Bigger cause.  And Ali was endowed with all of these characteristics.  He was a well spoken, confident, articulate, handsome, self-serving yet a self-sacrificing man. As a man of principle he sacrificed the lion’s portion of his career to protest the Murder of people’s in Vietnam.  As a warrior he navigated through several fights in which the odds were pressed against him and he managed to strategically maneuver and persevere  through these feats of human suffering.  As a prophet he foretold the world of his sure coming greatness and fulfilled these prophecies.  He Spoke of his forthcoming greatness and ushered himself into this greatness.  As an articulate poet, he gave the public catch phrases and rhymes that reverberated in the collective conscious of the public.  These literary gyms help push forth the many prophesies through mere repetition and quantitative thought of the public.

Ali was more than a man.  He is a symbol beyond himself.  He is a symbol of championship and a barometer of the people of the time.  The mindset of the era, and the hope that ensued.  He represented n embodied what it meant to be American. 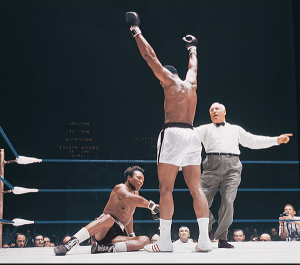 Which brings us to one Floyd “Money” Mayweather.  A modern icon, he too stands for more than just a fighter.  As his name entails, he too is a symbol of our era and unfortunately, is a barometer of our era as well.  Floyd is the, self-proclaimed, greatest boxer that has ever  lived. And he has a myriad of fans who would support the notion.  But who is Floyd in comparison to the Great Ali.  As a man, what exactly does he symbolize?  And if we are using his Symbol to eclipse that of Ali, what exactly does this implicate or entail? 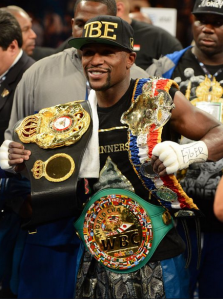 Analyze Floyd, he is a man small of stature.  He is boxer who is undefeated and is known for his preternatural ability to leave a fight unblemished– meaning he has never had to overcome within a fight.  He is a man who puts much of his value in the money that he has obtained.  He derives vast self worth from the money he possess.  Not to imply that he doesn’t use his money to help others but when confronted about possibly donating money to Africa this was his response.

“[People] say ‘well, he got all this money, why is he not giving to Africa?’” starts Mayweather. “Well, what has Africa given to us? 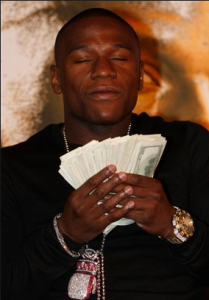 And if you would take look at this statement, you would see it is but a cross-section of the larger picture.  This statement alone can summarize the persona of Floyd “Money” Mayweather.  Yet he too has very redeemable qualities.  He too, is prophetic: prophesying his forth coming glory and putting in the requisite work to ensure these prophesies come true.  He is a very hard worker.  And of course, he has yet to lose.

But as a symbol what are we believing in, if we place him on a pedal stool above the Great Ali. What exactly are we uplifting?  The symbol of our era: a small man, self-absorbed, self-righetous, self-proclamating, an anti-prophet, money obsessed, inarticulate and self-centered individual.  He does not stand for anything outside of himself, and he reduces his movement to something very small and very confined.  He is currently not in the state of mind to allow his movement to be bigger than himself.  So it reduces both his role and his iconic status, although, this may be an accurate barometer of the current era.  And it may be why so many people identify with the man, because he is everything that they want to be.  He is everything that they hold in high esteem.  He represents everything that they value and in their eyes he is the perfect representation of the era.  Now what that implicates is far more tragic and is meant for another blog.

So we have one closed off individual who keeps most at a distance and is quite introverted vs. the ultimate “man of the people”.  And Ironic enough, as America has declined, so has its symbol.  And now we have a new symbol to go hand in hand with a new America.

So, to whom do you see as the Greatest? 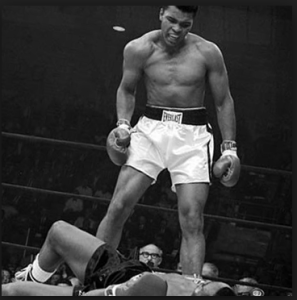 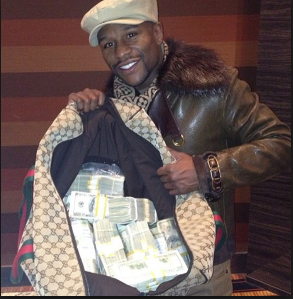