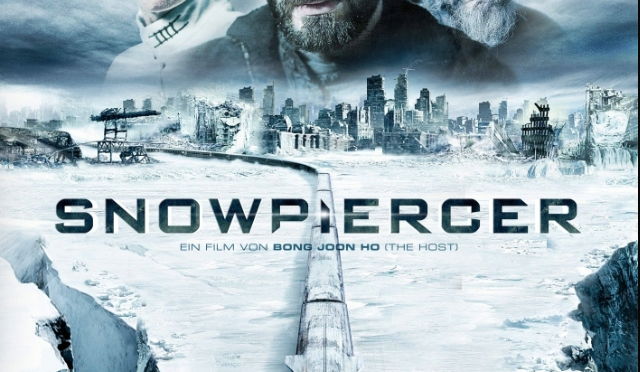 –A movie that that provided more intrigue than I anticipated. It is a movie that is rich in theoretical launch points. Yet I will only reflect on a few.

It is yet another movie about a dystopian future, although it is framed with a twist.

The film revolves around a train called the Snowpiercer. It is a self-sustaining train that is home to the entirety of humanity–or what’s left of it. The entire population of earth was killed by an man-induced arctic age(in response to global warming), in true Noah’s arc fashion, the only survivors are those living on the train. The train circumnavigates the entire globe in a one year cycle. This is one of many biblical allusions that the film calls upon.

The train is divided into a social class hierarchy– the elites who are closer to the head of the train and the proletariat who are at the tail of the train. There supposedly is a middle class but to me they aren’t evident. Yet there is a clear divide between the have’s and have not’s.

As in many of the other movies that I have analyzed, it shares a common motif of the white-male patriarchal-dominated society within this condensed social ecosystem of a train.

At the very head of the train is a man named Wilford. He is depicted as a cyclical old white-man that utilizes psychological tactics to manipulate the whole of humanity(or what’s left). He has very little sympathy or empathy for any of the passengers on the train his only concern is to keep the train running. In fact his philosophy is that everyone has an arbitrary lot in life and they all must play their role, and that role isn’t chosen by them but chosen for them. He keeps himself imprisoned in the head of the train as a means of “self-sacrifice”, to show even the God of the train must suffer through isolation.

As in many of the other movies I’ve analyzed, Wilford uses the classic common ploys of secrecy, manipulation, scapegoats and violence to enact his will on to the people.

The fact that there is even an underclass was quite interesting. The underclass was reduced to starving and even cannibalism until the “generous” wil ford gave them rations of protein bars (which happened to be grounded up roaches). The underclass didn’t appear to provide much as far as labor. And the elite appeared to have an abundance of resources.
Wilford’s only justification for the mal treatment was “everyone has there preordained position in life.”

The dynamic created an odd ecosystem. Not one based on natural selection. Not really based on any selections process at all. It is simply an arbitrary social status put into place and all are attempting to survive the best way they know how. Wilford did exercise population control by manipulative means. He would work hand in hand with the leader of the underclass to incite various riots in which a portion of the population would then be massacred– justifiably.

Each social group is trapped in there own type of cage within a cage. The proletariat are in the back of the train, with very little resources. All they have to survive upon is their humanity and kindness for each other and the hope that they will one day have a successful revolt. The elite of the train are completely superficial, they have all the amenities but have no purpose in life. They too are stuck in the misery of living their entire existence on a train. No matter how you dress it up, you are on a train for the rest of your life. At the absolute head of the train is the Wilford– the god of the train. He keeps the engine running and although has all the “power” is completely sealed in isolation… He has very little interaction with the outside world, he simply stays in his castle pulling the puppet strings of the masses.

Another biblical allusion I found fascinating was the Trinity Motif. In which you have the main antagonist Wilford who sees himself as God but is actually satan, working in conjunction with the leader of the underclass who is depicted as a benevolent God like figure but is actually a devil because he leads his lambs to slaughter. And then you have the hope of the underclass, another young white man who is depicted as a Christ-like figure throughout the movie, he leads the revolt, but at the end of the movie it is revealed that he ate babies. It makes for an odd commentary about religion and the gods many of us serve. Where God and Christ were both used as instruments of hope by the manipulation of Satan to further his agenda.

Just kind of makes you wonder…

“We all die!” The children were indoctrinated to believe that if they left the train death was imminent… Any possibility of life outside of the box is null because there is no chance of survival outside of the train. I found this to be a great social commentary about the system we live in. Many of us believe this current way of life is the only manner of living. That without this globally established system we wouldn’t be able to take care of ourselves and chaos would ensue. But as the movie would later prove this idea was wrong.

I also found it ironic that the only way for humanity to escape this paradigm or system was to destroy the entire system and all that were slave to it.
At the end of the movie a massive train crash killed everyone except a small black boy and a late teen Asian woman. They were the lone survivors and survived outside of the train, and presumably were to usher in the next echelon of humanity (side note: the Asian gal was clairvoyant, if that means anything).

All and all I found this to be a great movie. Had many layers of thought provoking material and I only touched on a percentage of what it had to offer. I would recommend the movie for any thinker out there, for I’m sure you’ll find something worth your thoughts in this movie.